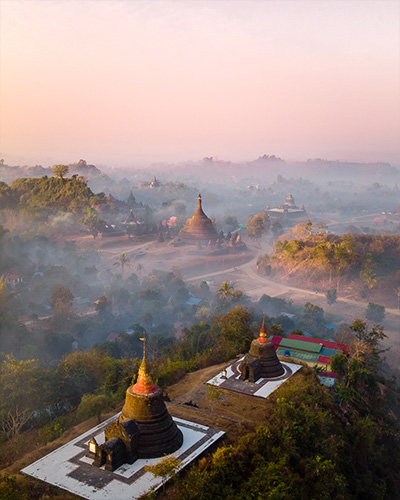 There is much to say about Myanmar. It is still one of my favorite countries to date. But if I would have to pick 1 spot that will forever be in my heart, it’s gotta be Mrauk-U. I discovered this by accident, through Daniel Kordan, a huge landscape photographer I’m following on Instagram. And immediately I fell in love with the undiscovered, raw feeling of these ancient ruins. So I put it on our must-do list for Myanmar and it’s part of my 28 days itinerary for Myanmar. See what I mean:

Now getting there was a whole other story. It’s actually located in the Rakhine state, which most countries consider to be off limits. Not that far from Mrauk-U there are still occasional skirmishes with the Rohingya moslim ‘rebels’. And only recently they even installed an evening curfew. So be wary 🙂

However the local people consider you to be a friend and welcome you with open arms as they depend on tourism for survival. They explained the fighting is ‘not allowed’ near the Mrauk-U village or near the ancient ruins. I can honestly say we felt 100% safe there (end of January 2019) and would highly recommend discovering this beautiful place for yourselves:

Now in order to get there, you need to find your way to Sittwe. So either fly in from Thandwe or take the sea ferry from Thandwe (not very reliable) or take a bus … this last option is a local bus going over the mountains during the night and is not a very comfortable option in my opinion! Needless to say, we flew from Thandwe to Sittwe 😀

Once you managed to make your way into Sittwe, you need to find a local ferry to take you to Mrauk-U. Going by boat is a very nice way to discover the beautiful landscape and rural life around the Kaladan river. During those couple of hours on the boat, you’ll see that the hilly greens are very different from what you’ve seen in the rest of Myanmar. So take it all in 😎

Mrauk-U itself is a small and cosy village that breathes life. We were one of the few white faces in town, but people treated us with a lot of smiles and were very helpful. As I mentioned before, they mostly rely on tourism to earn money. So they are very happy to see you!

From our Golden Mrauk-U Guest House we rented some bicycles in order to explore the amazing ruins that were left behind by the old Mrauk-U kings! (Learn more about the Mrauk-U kingdom) And there are quite a few. You’ll need to use the map provided by your hotel (has all the highlights, but not that precise), or rather an application liks Maps.me or pin locations on Google Maps to be able to orient yourselves in between the green hills. Maps.me will show you some good sunrise or sunset spots and how to get there, so that is mighty handy! But not everything is pinned yet, so be sure to explore around.

I suggest you start off by exploring the ‘Northern complex‘ where all the biggest temples are situated. As the concentration of ruins is pretty dense here, you can easily walk this part. First thing you’ll notice though, is how different these pagodas are to the rest of Myanmar. The Mrauk-U pagodas are bell shaped and made from a big grey natural stone, while the pagodas in Bagan for example are all made from small red bricks and a lot more elegant as they rise to their peaks.

Next thing you’ll notice is that the interiors are sublime, finished with nice sculptures, carvings, murals and long spiraling hallways leading up to the main rooms. While the interiors in Bagan for example are mostly not decorated at all and only boast big Buddha statues.

You’ll also learn that some of them were built and fortified to protect the treasure of the king. Instead of only having a religious intent.

The next day you can take your bicycles all the way East to the huge Koe-Thaung temple. This is the biggest temple on the site and it’s very impressive. It has a huge stupa in the middle and tons of small stupas along the sides as decoration. You’ll walk through the hallways to discover many murals and sculptures. It’s still being renovated as we speak. I would love to see what it will look like once it’s finished.

In the neighborhood you’ll discover plenty more pagodas, such as the monkey temple or the cool Latyar Pisi 😛

Mrauk-U sunrises are the best!

The main highlight of coming here tough, are the totally insane sunrises! And to a lesser extent also the sunsets.

Before sunrise, the village wakes up and every house gets a wooden fire going. In order to boil water for coffee or tee or to boil rice … Either how, this generates a ton of white smoke that slowly starts to cover the whole Mrauk-U area. It looks as if there was a morning fog crawling in, but it’s the white smoke! Sometimes you’ll be lucky and even get a combination of both !! 😮

This smoke/fog lingers in between the hills and pagodas and creates a super unreal dreamy setting. Then the sun rises to the occasion and illuminates the whole scene and the only thing you can do is drool in awe. And hopefully also take a few really cool photos from one of the sunrise spots 😉 , like this drone shot:

One of our all-time favorite spots is called the ‘Discovery view’ (on Maps.me) where you’ll have a view for the sunrise AND for the sunset. It’s set in a local guy’s backyard and you need to pay him 500 kyat per person (0,30 eur, lol 😛 ), but in return he maintains the stairs up his hill, so you don’t break a leg in the half-dark 😎 This is a drone shot I was able to make, flying from his viewpoint:

Another cool place for sunset is called ‘Sunrise hill’ (I know, kind of confusing 😛 ) on the West of the village. You’ll have to climb up a dodgy path covered with vegetation, but trust me, it will be worth it:

On the South of the village you’ll find 2 big lakes with some sort of mountain range in between them. This is another great sunrise spot where I took this drone picture:

And the best of all: you get all of this to yourselves! There are virtually no other tourists around. Especially on the sunrise hunt, we were always alone! During the day you might come across a few other white faces, but that’s it …

Are you ready for your adventure in Mrauk-U? 🙂

Do you want to read more on our adventures in Myanmar, start with my 28 days itinerary here.

The last 2 weeks in Belgium