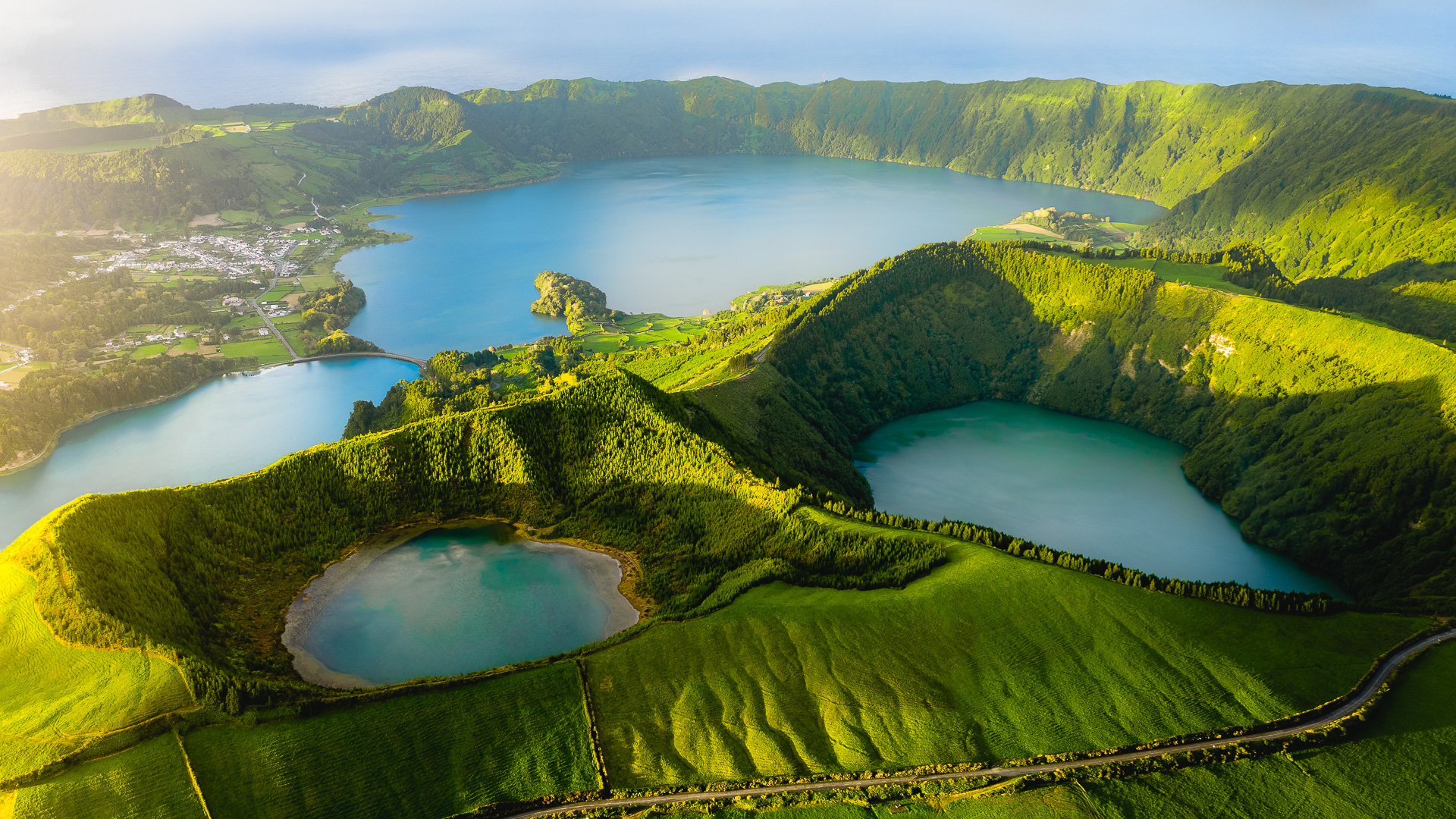 Before jumping into the aerial views from the Azores, let me give you a little context. Normally I would be out exploring some exotic location, bathing in sweat, but enjoying the sun! Instead the world traveler in me is slowly dying in my apartment in the cold Brussels. Covid-19 is no stranger anymore and has grounded me here as well.

I’m not going to lie, after 15 months of traveling around the world with my girlfriend, this does feel a bit strange. We miss the daily kicks en the ongoing adventures. And I can’t even pick up my old routines, because we’re in a semi-lockdown and the restaurants, pubs and sports clubs are closed down.

So we figured, why not try something different then. The borders within Europe are not actually closed. We’ve already done a couple of fantastic road trips through France, the Netherlands and Germany. The campervan really is the perfect way of traveling in a safe manner right now. But despite having seen some amazing places (really!), we don’t have any wild volcanoes or migrating humpback whales in Europe, like we’ve seen them in Indonesia and Australia … or do we?

Aerial views from the Azores

A couple of weeks ago the idea of the Azores came up. This is a group of volcanic islands, which are part of Portugal – so Europe, but lie somewhere in the middle of the Atlantic Ocean. Tourism has only been developed recently, even though it’s only a 6h30 flight from Brussels (over Lisbon). All of this sounds really attractive, right? On top of that they have very few Corona-infections, exactly because they are so isolated. And they test everyone who comes onto the island. Great, let’s go! Let’s find some amazing aerial views from the Azores.

Hold on a minute. Online I read that the end of November really is not the time to visit. There’s a lot of wind and rain during this period. On top of that the whales migrate around April-May-June, so no such luck either. But hey, why not right … can’t be worse than Belgium right now 🙂

And what a great decision this has been! Yes, we’ve seen a lot of rain and wind during these 2 weeks. But the weather changes so quickly, that you get to see blue sky just a few hours later already. Because the islands are full of volcanoes, you could have fog on the East side and I’m sunbathing in my swimming shorts on the West side.

Luckily they’ve developed an app called SpotAzores, that shows you the weather through live webcams on several key locations. This way you know exactly when to start hiking up the biggest volcanic lake on the island – the Lagoa do Fogo – and discover it in all its beauty. Because otherwise – 9 out of 10 – it will be covered in fog and you’ll miss some of the most spectacular aerial views from the Azores.

Most of our time was spent on São Miguel, the biggest of the 9 islands. Here you can easily spend a whole week. There is so much to see! A couple of highlights would definitely include the volcanic lakes at Sete Cidades. What a location, real postcard material. And you can do a hike that goes around the lakes. Do give yourself enough time and wear decent hiking shoes. Because you will literally be walking on the crater rim.

Definitely don’t skip the only tea plantation in Europe. The “Chá” has been brought here by Chinese masters. And honestly they did a great job. The fields are so nicely arranged on the hillside. At the old factory (Fábrica de Chá) you can still see all the traditional machines at work. But of course the most beautiful is a walk through the tea fields themselves. Just look at these drone views:

I would also highly recommend to just take the car and go for a drive along the coastline. You’ll pass by some amazing views, ranging from unique little islands just off the coast, to cozy little harbor-villages and above a lot of raw rock formations everywhere. Where the sea clashes with the volcanic rocks.

We also spent a few days on Terceira. This island is situated in the middle of the group. And the landscape is completely different again. They breed a lot of cattle here and from above it looks just like patchwork. Really funny. The best view is from the top of the Serra do Cume, from where you can oversee half of the island. But Terceira also has some crazy rock formations along the coast, from where the sound of the waves bashing is never far.

The cherry on the cake happened on Faial, where we swam with a ton of wild dolphins. Mind blowing how fast they are in the water. We also spotted a 12-meter long sperm whale, a mother with her calf. Just chilling in the water, before diving back into the deep with a gentle stroke of her tail. Back to 1.000m where those delicious squids are hiding.

I guess I don’t need to tell you what an amazing feeling this trip has left us with. The incredibly wild landscapes, combined with European culture, really makes the Azores a dream destination. And for me – as a drone photographer – this was truly drone paradise. In between the showers of rain of course. The aerial views from the Azores will forever be in my mind 😍

I’m so enthusiastic that I want to go back in the beginning of May with a group of drone photographers. Because it’s spring – so lots of flowers – and the humpback whales (13-16m) and blue whales (25m) are back then. Do you want to join me? Read all about it on my drone photo trip page, so you don’t miss out!

Want to see more photos from the Azores? Check out my full gallery.