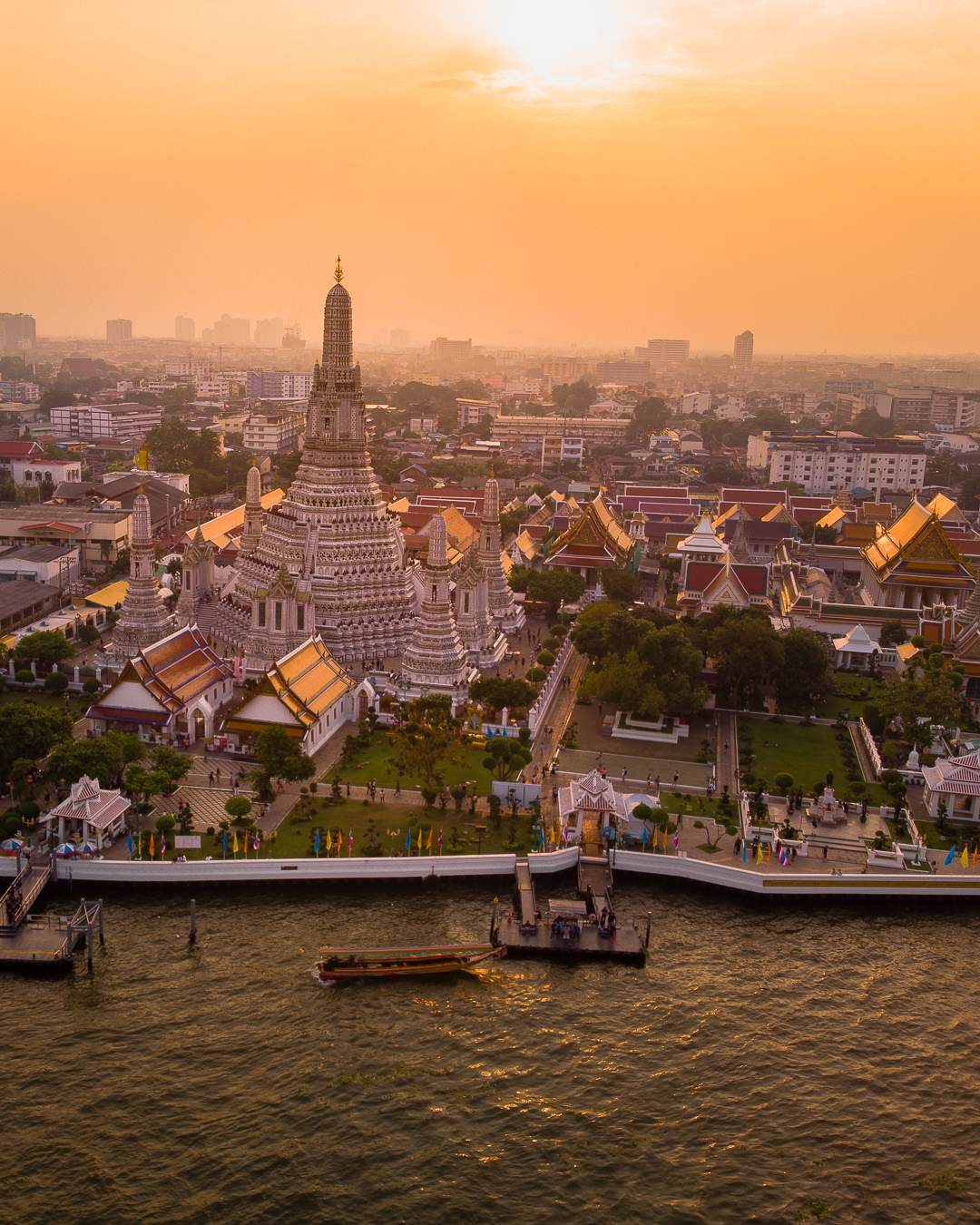 As we were flying over Bangkok to Myanmar anyway, we decided to make a little pitstop in Bangkok first. This would allow us to see Bangkok and surroundings, which we would otherwise have had to skip. It would also allow us to get a smoother transition from our cold and dark winter into the hot and humid Asian climate with 6 hours’ time difference (earlier), before venturing into the very basic circumstances in Myanmar.

After having spent 7 days in and around Bangkok (we stayed in Blissotel Ratchada), I can now look back on a warm sweaty week with a lot of so-called highlights and let you in on some of the adventures:

Before I dive in, just a quick word on Bangkok itself. It’s a big city! Being used to Brussels, I was surprised to learn the scale of this city with 8M inhabitants and still 5M more in the suburbs. They have several Metro and Skytrain lines to take you everywhere. The old city is only reachable by taxi/tuk-tuk or by ferry, which is actually a very nice option! A bit away from the busy streets filled with smelly cars. And oh yes, there are a lot of them.

When we were in Bangkok, there was a code orange in terms of air pollution. Measuring 4 times the allowed maximum pollution, everyone had to stay inside or wear a N95 filtration mask to go outside. Eventually they created some artificial rain to take down the small dust particles in the air. If not, schools would have been closed the next day.

But I also need to applaud their efficiency. I thought you only saw disciplined waiting lines in Japan, but Bangkok sure drilled their inhabitants as well. Everybody waits politely in the designated area before entering the Skytrain, allowing the inside passengers to quickly leave the train. Haha, what a welcome difference with Brussels where everybody is elbowing to get in first. Similarly, they all stay in one line on the right-hand side when climbing the stairs, allowing others the necessary space to come down on the left-hand side. Great 😊

The temple complex next to the Grand Palace is very beautiful. However, the place is way too crowded with busloads of tourists to really be able to appreciate it. I personally also found it way too packed with different styled temples. Everywhere you looked, there was a temple in a different color and style. It did not make the place very coherent. The murals all around the main wall were very noteworthy though, so make sure you don’t miss these!

The Grand Palace itself was definitely a let-down. You could not enter the buildings and from the outside there was not much to see or explore.

Being described as the best floating market in Thailand, our hopes were up! Today was all about escaping the city and exploring the surroundings of Bangkok. However, getting to Damnoen Saduak was an adventure in itself. First we took a Grab (equivalent of Uber in Asia) to the Bangkok Bus Terminal (Southern Line), which is actually not accessible by public transport ?? Our bus turned out to be a minivan which we shared with 2 tourists from Hongkong and some locals. After a bumpy 1h30 ride we arrived at the floating market. Yeey, we were excited!

Hmm but this is not the floating market :p … rather the place where the small motorboats embark to take you into the canal and to the floating market. Aha, basically meant we had to pay more money (of course). The first part of the narrow canals was enjoyable, but the excitement was quickly dampened when we arrived at the actual floating market.

Let me get one thing straight, there is nothing floating about this market. Big concrete warehouses with tons of little stands on the banks of the canal, all trying to sell you overpriced food or overpriced souvenirs. The only thing floating in this market, is you in your narrow boat, trying to find a way through all the other tourist boats. All while being gassed by the blue fumes created by the massive engines they use to power these small boats.

We were very disappointed by this ‘highlight’ ☹

Another highlight you’ll find in most blogs or travel websites. We were very excited to learn about the history of Thailand through its most important buildings.

I can be very shot about this one. It’s not a highlight.

Taking the BST down to Kheha and then a small bus to the entrance takes about 2 hours. Not much to see really on the way there. Once you enter Ancient City you immediately understand there is nothing ancient or authentic about this place. I’d call it a Disneyland of replicas with no decent information or interaction to tell you anything about the context, importance or history of each of the buildings. If you are interested in knowing the stupa has 5 rings, then I suggest you do get an audio guide like we did. #sarcasm

One thing I will admit about Ancient City, is that the buildings were very well crafted and maintained. But we personally didn’t even feel like taking a lot of pictures there, we’ll wait to see the originals.

Only 1 hour from Bangkok, Ayutthaya is the reason I wanted to stay a few days in Bangkok. I love ruins and judging by the pictures on Google, this was a must do.

Getting to Ayutthaya was surprisingly easy. You can go by taxi, bus or – like we did – just by train. The train takes about 2 hours, but for that price you can’t complain. Besides, taking the train is already an adventure 😊

Once we arrived in Ayutthaya we had to get a little ferry boat across the river, as Ayutthaya is situated on an island. Once on the island, we rented 2 bikes to get around easily. You can also get a tuk-tuk or taxi, but we’re young and biking at 34 degrees is what we do best *ahum*

Anyway this was definitely a lot of fun and in my opinion the best way to see the different temples. Don’t worry, they have paved roads everywhere. You just follow the little map and explore.

This is the main downside of Ayutthaya as well. It doesn’t feel super authentic when the ruins are surrounded by paved roads and loads of traffic. Kind of wears down the experience a bit.

The temples of Ayatthuya are not the most spectacular I’ve ever seen, but then again I’m a spoiled brat when it comes to temples. They are however really worth the trip and despite the lack of information – this seems to be a common problem here in Thailand – I really enjoyed the visit. By far the most impressive temples were the Wat Chaiwatthanaram on the far side of the river and the Wat Phra Si Sanphet with the 3 enormous stupas still standing.

At most temples there is a no drone sign, except at Wat Ratchaburana. So I decided to take my drone for a spin. In the 5 minutes before I was attacked by local security and 1 police officer, I still managed to take a couple of shots and 1 small quickshot video. The police officer ordered me to delete the footage, so I showed them my phone – where the low-resolution streaming is captured – and deleted everything. They were happy, so was I. My HD footage was still on my SD card, hence why I can show it to you 😊 and I’m not in jail (yet).

I’m not a huge fan of markets in general. I usually start getting annoyed after 5 minutes, but I wanted to replicate this drone picture and my girlfriend wanted to go check it out. So off we went!

I didn’t find the spot with all the colored tents. Not even after getting my drone in the air as a spotter. Everything in the Chatuchak market is just grey and concrete. Some Googling later that day, I now presume the market is extended at night and that’s where you’ll find the spectacular scenery. Too bad ☹

The market itself is huge and you’ll literally find everything there. Claire had her yoga pants repaired and we found a cool art section in the Northern part of the market with some really cool artwork. Other than that, I personally don’t recommend the market unless you know what you are getting yourself into.

Most people and blogs recommend the street food. I’m happy to say the street food is everywhere and is mostly delicious! If you watch out a little bit, no fried chicken wings that have been lying there for 3 hours for example, you’ll have a great time enjoying the different types of street food. Don’t count on eating incredibly healthy in Bangkok though, as most of stuff is fried or baked in greasy oil and raw vegetables are generally a no-go. But don’t let that spoil the fun 😊

On the plane from Brussels to Bangkok, we saw a trailer for a show called ‘Khon’, a classical masked dance at the Sala Chalermkrung Royal Theatre. The trailer looked exciting, the reviews were good and there were still some seats available. Ho-ho-ho it felt like Christmas all over again. Let’s book some tickets and fast!

When we arrived on Friday evening, the theatre seats were more than half empty. Strange …

After half an hour I was struggling to stay awake – despite the freezing cold airco. The play was very slow. The story was obvious and dragged on and on. The subtitles only translated like 1/3rd of the spoken text. And it was the first time we slowed down all day, from visiting the Grand Palace and standing around in 34 degrees.

On the other hand, the costumes and masks were outstanding. But not enough to make the magic work. Small bonus: the actors came out to greet us after the show, still in their traditional dresses, smiling for a dozen of cameras.

As we are great fans of theatre and musicals, this ‘highlight’ was rather disappointing as well, unfortunately.

Hope you enjoyed the information and my honest opinion 😊

Preparing for a 1 year world trip